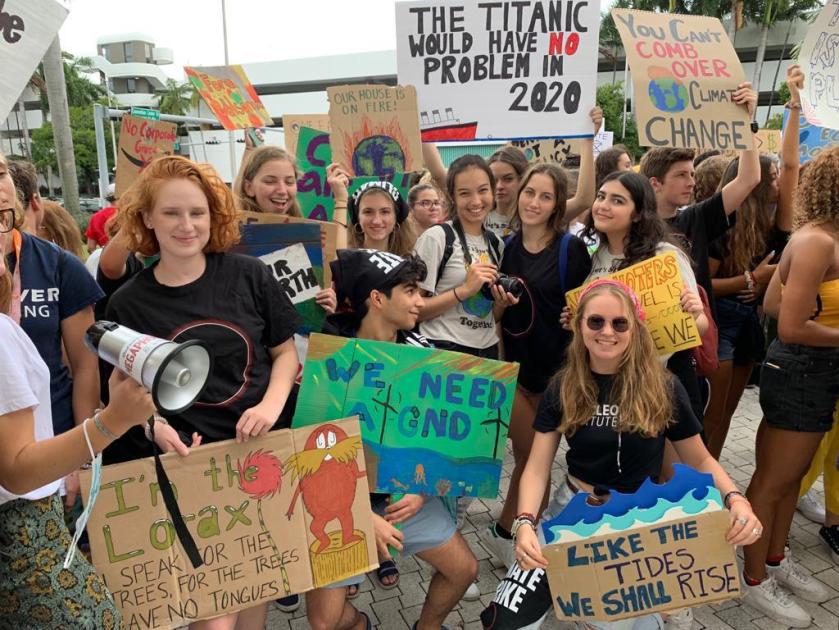 On September 20, millions of young people across the globe united to inspire governments to acknowledge rising carbon levels. Strikes were reported in 185 countries on all seven continents.

The strikes were inspired by the efforts of many young climate activists, most notably Greta Thunberg, a sixteen-year-old  from Sweden who began striking from school over a year ago. What started as a small group of protests has grown into a major movement supported by many international environmentalist organizations such as Extinction Rebellion, 350.org, and Greenpeace.

In Miami, MAST students, faculty and alumni joined other strikers to encourage government support of climate change prevention outside of the Miami Beach City Hall. Rallying cries could be heard outside the steps of the building as students leaders asked the audience “What do we want? Climate Justice! When do we want it? Now!” It is clear to see that these students are tired of the excuses being thrown by politicians and want to see action soon.

One MAST student, Skye Hervas-Jones, told The Miami Herald that “We have to actually do something, we have to get up. We can’t be lazy anymore. We are given this one life and we have to do something with it.”

The young leaders were not the only ones striking outside of City Hall that day. The Miami strike was organized in part by The CLEO Institute, a local group that aims to educate the community on climate change and its effects. They host informational sessions across South Florida to train individuals on how to demand climate action, and send some of their representatives to the protest.

Striking for the climate is particularly important in Miami, where we will be especially affected by climate change due to rising sea levels. Already, we are seeing major changes locally because of increasing temperatures. In Miami Beach especially, king tides have become a major problem. King tides, which are higher tides than normal, may become more common occurrences as sea levels rise. Flooding from king tides, affected by gravitational pull and the moon’s phases, can even come on sunny days. Additionally, sea level rise is causing the porous limestone that Miami rests on to leak out some of its saltwater into the streets. If this saltwater continues to infiltrate infrastructure, it could have serious consequences.

In Miami Beach, support for climate change awareness is supported by the local governments.

In a statement given to The Beacon, Miami Beach Commissioner John Elizabeth Alemán said, “I was impressed to see so many young people turn out on the steps of City Hall to deliver their demand for faster action against climate change. I hope what I’m seeing is a new generation that realizes the power of their vote, that won’t stand for the denial and apathy that got us here in the first place.”